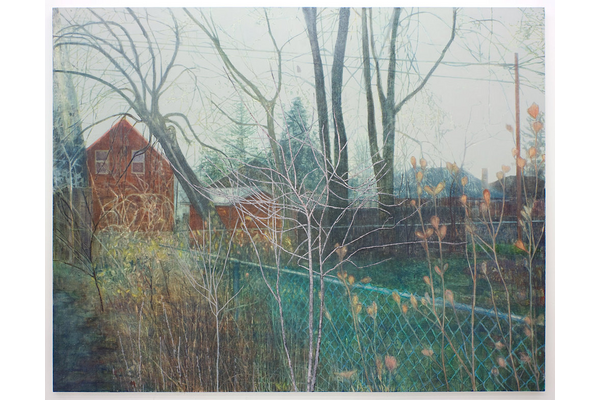 Sky Glabush: The Visible and the Invisible

When I moved to London Ontario in 2006, my interest in the relationship between social space, architecture and modernism began to shift. I became interested in the way painting as a medium often exerts a strong influence on the way "place" is understood and seems to haunt the social imaginary. I am particularly interested in investigating and maybe renovating an early modern notion of the pictorial that draws on the discourse of painting's specific syntax and history, while finding expression in the local and familiar. It is a concern for imaging experience through the framework of the everyday that led to my interest in regionalism and its legacy here in Southern Ontario.

But instead of thinking about the regional as something embedded in the past, as a kind of reaffirmation, I sought to examine its relevance and register the distance between any initial radicality and its present state. I began to look at the legacy of artists like Jack Chambers and Greg Curnoe, whose work is grounded in an immediate concern for the local, but also connected to an understanding of contemporary art and the avant-garde. But the harder I looked the more fleeting and distant their influence seemed to be. Instead of thinking about this nostalgically or sentimentally, I attempted to absorb their ideas, to try and apply this notion of "realism" but with the awareness that their self-assured directness existed for me only as a faint signal. So the places I have chosen to paint rest on a liminal edge between the emphatic and the fleeting or ephemeral. These are places that are neither frenetically urban nor decoratively pastoral; not really inhabited but not empty wilderness either. In these paintings I have attempted to acknowledge the precedents of the past while remaining open and receptive to the specific and somewhat haunted quality of the familiar.

Sky Glabush was born in Alert Bay, British Columbia, and grew up alternating between the West Coast and the prairies. He moved to the Netherlands in 2000, where he was artist-in-residence at Haagweg 4 in Leiden for six months and soon after established a studio in Amsterdam and began to exhibit with Suzanne Biederberg. Glabush returned to Canada in 2003, and has accepted a faculty position in Studio Art at the University of Western Ontario.