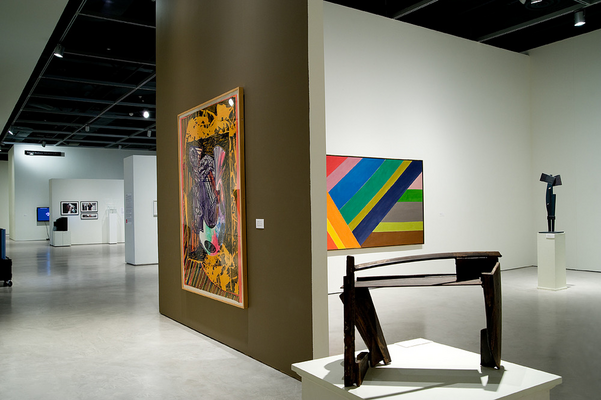 Works from The Morris and Beverly Baker Foundation

After WWII, abstraction spread across Canada to manifest itself in significant regional movements. This led to experiments with form and technique. In Toronto, artists were exploring more radical solutions and began looking to European and particularly New York abstract expressionist painting for influence. The Painters Eleven, amongst them Jack Bush (V-Cut 1967), Kazuo Nakamura and Jock MacDonald, were associated with Colour Field and Post Painterly Abstraction, much like their American colleague Frank Stella (Bene Come il Sale 1989). This group of painters held no single vision of the nature of abstraction and as a result they developed their own personal painterly vocabulary and expressive forms.

On the other side of the country, the Canadian West Coast painters were responding to landscape inspired motifs and the lyrical abstractions of painters like American Jules OIitski (Circulating Presence 1983.) Vancouver had and still has the largest concentration of artists and the longest history of interest in modern art: Jock Macdonald was working there in the 1930s and Lawren Harris settled there in 1940. The two principal artists from the 1940s, both as artists and teachers, have been B.C. Binning and Jack Shadbolt. Binning is best known as a draftsman and a painter of abstractions of ships and landscape. Shadbolt, deeply affected by the richness of the landscape and Northwest Coast Native Art, interpreted these themes in a highly personal surrealist manner. A combination of landscape and lyrical abstraction characterizes the work of Gordon Smith, Takao Tanabe and Don Jarvis, a direction reinforced by Toni Onley who moved to Vancouver in 1959.

A more rigorous form of abstraction, important for a younger group of painters, came from Roy Kiyooka who moved from Regina to Vancouver in 1959. In the 1960s and 1970s, Vancouver experienced the diversification of interests that occurred in Toronto and Montréal, with particular strengths in conceptual and communication art, video and performance through the work of Iain and Ingrid Baxter in their N.E. Thing Co. (formed in 1966), and Michael Morris and Gathie Falk, whose work has encompassed performance, painting and mixed.

Through the 1970s, the place of painting at the leading edge of the visual arts was challenged critically by developments in conceptual art, installation art, sculpture, video and performance art. The question, "Is painting dead?" could be heard ringing through artistic circles. For many people, painting, if it survived at all, would do so as an essentially reactionary form. But painting did not come to a standstill, and in recent years activity in the field, internationally as well as in Canada, has developed rapidly, especially among younger artists. Paul Hutner's (Canadian b. 1958) abstract work Border Crossing (1984), includes figurative images that are woven into the abstract concerns of the activity of painting while Katja Jacobs (Canadian, b. 1939) explores sensual surfaces and patterning in Memphis Tie #1 (ca.1980).

The Works from The Morris and Beverly Baker Foundation and Approaching Abstraction: Works from the AGW Permanent Collection exhibitions have been selected to re-cap the story of abstraction both nationally and internationally, emphasizing the parallel themes and artists who assisted in creating this dynamic and influential movement.