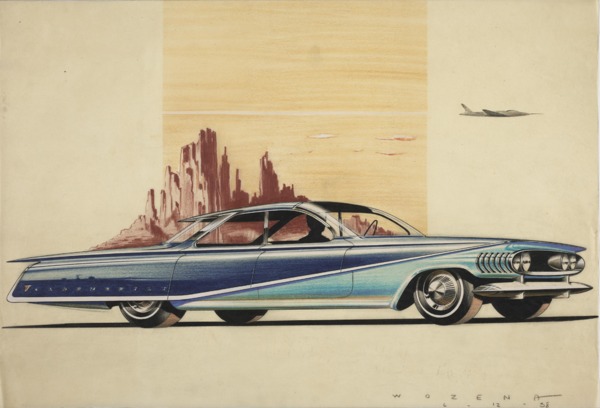 In response to the Detroit Auto Show, The Art Gallery of Windsor and Artcite Inc. present four exhibitions that provide a variety of perspectives on the way in which cars influence our lives. You are invited to the AGW and Artcite Friday, January 15 at 7:00 P.M. for Fridays Live! the opening reception for:

Here in My Car: Beyond Autopia & Autogeddon
Organized and presented at Artcite Inc.

Future Retro Drawings from the Great Age of American Automobiles
Organized by the Museum of Fine Arts, Boston

More about the exhibitions:

Here in My Car-Beyond Autopia & Autogeddon explores the way in which cars have profoundly altered the patterns of human life. Eight artists from Canada and the United States examine the automobile in relation to private and public space, urban and ex-urban infrastructure, social relations and the construction of personal identity. Located at Artcite Inc. galleries at 109 University Avenue (the Capitol Theatre building) this exhibition features the following artists:

While there is no doubt that driving has come to represent much that is negative in rich societies, it is also a ubiquitous activity that, in many respects, contributes to the development of personal identity by providing autonomy and defining status while creating a unique context for self-reflection and exploration.

Despite the dystopic view of cars that has dominated much contemporary culture since the sixties -think of Godard's ten-minute tracking shot of stop-and-go traffic along a country road strewn with car wrecks in his 1967 film Week End-driving can also be interpreted as a metaphor for the way in which consciousness unfolds in time and space. As Tom Cochrane put it succinctly in his eponymous 1991 song "life is a highway". And it is this aspect of driving that the ten artists in Here in my Car explore.

Any discussion of driving and consciousness usually begins with Jack Kerouac's seminal novel On the Road, the subject of Julie Sando's Tapping Jack, 2009. The artist re-enacts Kerouac's stream-of-conscious writing marathon by retyping the entire manuscript of On the Road (blurring over the racist and homophobic passages) on a continuous scroll. Iain Baxter&'s photographs taken during his own travels in the sixties and seventies demonstrate the ubiquity of the road trip as one of many paths to self awareness that dominated the period. And Sandi Wheaton continues in this vain with a series of photos taken from her car during a recent journey on Route 66.

Zeke Moores, Brandon Vickerd, Trevor Mahovsky and Rhonda Weppler focus more on specific vehicle models-the Lincoln Navigator, Monte Carlo and Ford Escort-each with its unique complex of social and cultural associations. Using unexpected materials such as wood and aluminium foil, each of these works transforms our perceptions, associations and memories of each vehicle's unique zeitgeist.

Daniel O'Connor, a former trucker, has made a site-specific work that presents live CB radio conversations emanating from the Ambassador Bridge that joins Windsor and Detroit. Visitors are provided with a glossary to translate the CB dialect (a school bus becomes a cheese wagon) thus providing further evidence of the way in which the road shapes individual and group identity.

Hamilton artist C. Wells takes to the road more literally, focusing on the cultural geography demarcated by road lines and their historical implications. Drawing on the seemingly unrelated histories of landscape painting, traffic safety, and topophilia (as defined by the Chinese-American geographer Yi-Fu Tuan), Wells incorporates the codes and conventional practices of yellow and white road lines into a variety of unexpected contexts.

Future Retro: Drawings from the Great Age of American Automobiles features over 130 rare, original works that reveal the seductive beauty of post-war American automotive design. Organized by the Museum of Fine Arts, Boston, Future Retro provides a revealing overview of the creative process behind the scenes at Detroit's big three car companies through an eclectic mix of illustrations, ranging from preliminary sketches to fully rendered presentation drawings. Some depict concepts that would later be incorporated into specific models. Others represent futuristic ideas that never made it past the drawing board. Dating from an era when design and appearance were increasingly important factors in automotive sales, Future Retro abounds with shiny, glamorous cars, many portrayed within utopian environments replete with attractive Americans, palm trees and modern architecture.

Todd Munro: The Road Works an exhibition of prints about cars by Quebec artist Todd Munro.