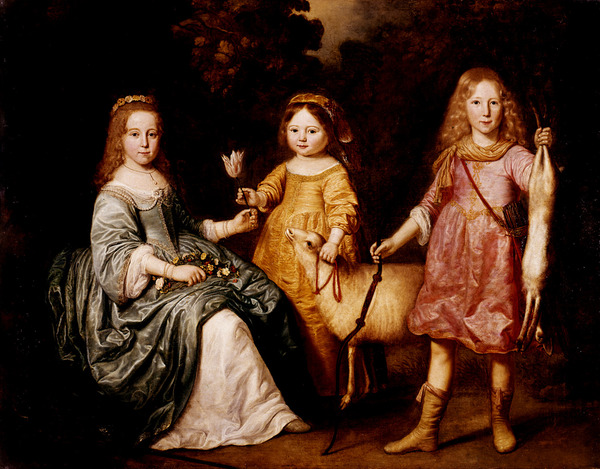 When Dirck van Santvoort painted “Portrait of Three Children” at the age of 35, he was at the height of his artistic career, yet, unknown to him, his fortunate timing would set him in a coveted place in history centuries later—the Dutch Golden Age.

Born into a family of artists, Dirck did what many other painters (like Rembrandt) did in the thriving merchant city of Amsterdam—he got into painting portraits of the newly rich. This was the second highest in a “hierarchy of genres” at the time, but the easiest to sell for the most money if you were highly regarded, as van Santvoort clearly was.

Obvious distinctions of “Portrait of Three Children” are that it is massive compared to many other formal portraits of the time and the children are painted in jewel-colored satin clothing, both demonstrating the wealth of the family who commissioned it. It’s a common pastoral scene, typical of van Santvoort, with the artist portraying the son as a hunter and the youngest daughter as a shepherdess, and Dirck employed the common use of tenebrism to highlight the importance of the family and the contentment of their bourgeois, though still Calvinist, prosperity.

I am a self-taught artist, working mainly in oils, charcoal, and graphite, and in the Contemporary Realist or Contemporary Figurative styles. I chased the elusive mastery of my artistic abilities from the time I was a young child until I completed high school, putting it aside for twenty years after deciding to pursue Graphic Design, write novels, and pursue an editing certificate with UC Berkeley. I was gifted my grandfather’s paints and brushes in 2018 and began creating art again. I have been learning the craft on my own through practice and reading ever since. I sold the first oil painting I created to an international collector, through an open-call group show, and was invited to become one of the gallery's regular artists. I'm highly influenced by historical masters like Rembrandt, Degas, Gericault, Klimt, and The Wyatts, and contemporary masters like Bo Bartlett, Kehinde Wiley, and Margaret Bowland.