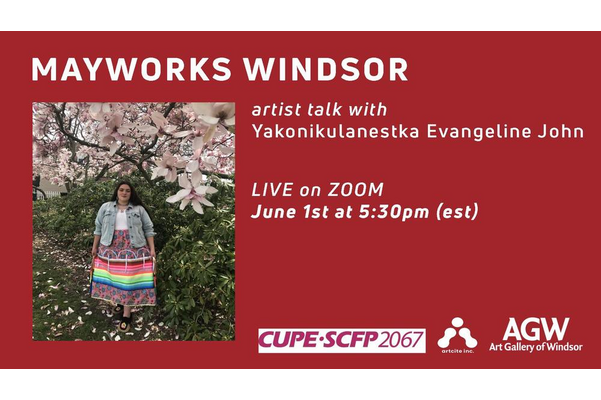 THIS EVENT HAS BEEN POSTPONED TO A LATER DATE. To stay up to date, please visit www.artciteinc.ca

In celebration of Windsor’s MAYWORKS festival, Artcite and the Art Gallery of Windsor present an artist talk featuring Artcite’s BIPOC Artist-in-Residence: Yakonikulanetska Evangeline John. John will activate the Artcite gallery for a full month this summer. Yakonikulanestka’s art has always been Indigenous-focused, bringing awareness to Indigenous issues, and giving positive representations of Indigenous Peoples through art. Most importantly, she devotes her art to the continuation and revitalization of Indigenous art forms. (Yakonikulanestka Evangeline John)

In this artist talk, John will discuss the artistic goals for their residency, their research, as well as their methods of using art to reconnect with the land, unlearn systems of oppression and heal from feelings of displacement. Tune in via Zoom on June 1st at 5:30pm (est).

Special thanks to CUPE 2067 for supporting this year's Windsor MAYWORKS event series!

This opening sentence is a traditional introduction in the Oneida language. It states proper greeting of all beings, then states her traditional name Yakonikulanestka (she of soft mind), is a part of the bear clan and that her nation is the Onyyota’a: ka:(standing stone).

Yakonikulanestka Evangeline John (she\hers) is an indigenous multi-disciplinary artist, currently finishing her first year of the BFA program at the University of British Columbia, Okanagan Campus. Being raised within her culture by going to ceremonies since childhood gave her strong roots in connection to Indigenous art forms.