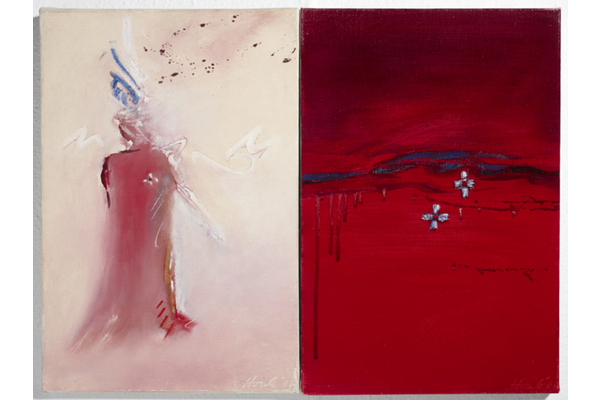 Robert Houle's multi-media installation, Paris/Ojibwa comprises a theatre set replete with a sound component and futurist video projection that re-imagines a grand 1845 Parisian salon in which two different cultures, Ojibwa and Parisian, make contact, evoking the lingering memory of Maungwudaus and his Ojibwa dance troupe performing for the Parisian court. The title alludes to this contact between Parisians and a group of exotically garbed indigenous people travelling from Canada who impressed the Parisian imagination in the 19th century and inspired painters and poets, among them Eugène Delacroix and Charles Baudelaire. From April to December 1845, Parisians saw the authentic Mississauga on their streets as well as at court. George Henry, Maungwudaus, and his family and companions had left London at the request of George Catlin (1796- 1872) to replace the Iowa in the tableaux vivants that complemented the display of Catlin's paintings in Paris. Taking on this little known history, the artist Robert Houle has accomplished a tour de force in bringing the tale of these dancers, who performed for Louis-Philippe and his queen Amélie, forward to our times. Through reflection on Delacroix's timely observations and sketches and in studying the journals of the dance troupe's leader Maungwudaus, Houle breathes life back into the forms of the Mississauga dancers.

The exhibition is organized and circulated by the Art Gallery of Peterborough.