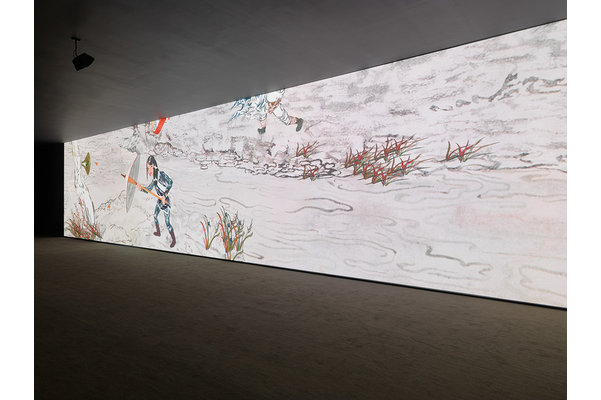 Retainers of Anarchy is a solo exhibition featuring work from Howie Tsui that considers wuxia as a narrative tool for dissidence and resistance. Wuxia, a traditional form of martial arts literature that expanded into 20th century popular film and television, was created out of narratives and characters often from lower social classes that uphold chivalric ideals against oppressive forces during unstable times. The People’s Republic of China placed wuxia under heavy censorship for fear of arousing anti-government sentiment. However, practitioners advanced the form in Hong Kong making it one of the most popular genres of Chinese fiction. The title work, Retainers of Anarchy, is a 25-metre scroll-like video installation that references life during the Song dynasty (960–1279 CE), but undermines its idealized portraiture of social cohesion by setting the narrative in Kowloon’s notorious walled city—an ungoverned tenement of disenfranchised refugees in Hong Kong which was demolished in 1994.

Howie Tsui: Retainers of Anarchy is organized and circulated by the Vancouver Art Gallery, Canada and is curated by Diana Freundl, Interim Chief Curator / Associate Director.