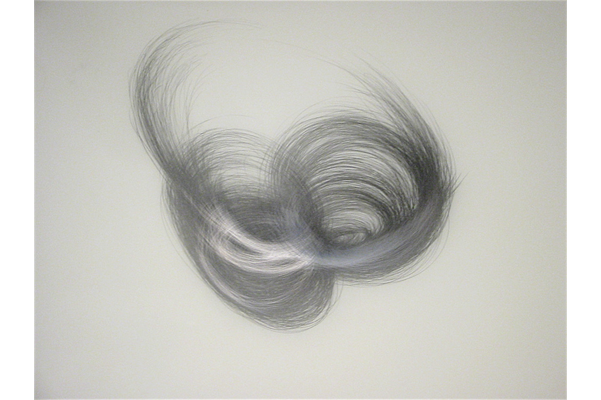 David Merritt wryly characterizes his artistic practice as "loitering at the intersection of drawing and installation." Appropriately, this exhibition features a selection of drawings, sisal sculptures, and video works exploring aural experience.

Merritt's drawings are decisive explorations of image and sound. The contents of his chart drawings are derived from databases of popular music. Taking the titles of popular songs, he maps them in intricately drawn diagrams, making connections between the many songs that use the same phrases, such as "last train." In a cartoon-like speech bubble, "last train" is drawn at the top of this chart, its presence a seed for an explosion of musical associations: last train... has gone; last train... to... the stars; last train... tonight. Interwoven lines, supplemented by many erasures, impose a new order on familiar musical phrases. The viewer is invited to decipher the connections from within the dense layering of marks comprising this chart. Upon close viewing, the intricate construction becomes apparent.

In bmi 100, Merritt draws connections between the song titles of Broadcast Music Incorporated's 100 top-earning songs of the twentieth century. These exercises in nomenclature, or naming, trace Merritt's train of thought. In spite of the rigid parameters of his deconstruction and categorization, the resulting works somehow -- indescribably -- seem to make music visible.

In many ways, Merritt explores the diminishing space between what is considered natural and what is considered a cultural construction, such as language. Language can be a tenuous form of communication. By separating words from their familiar contexts, Merritt draws attention to the ways in which we assign their meanings.

David Merritt is based in London, Ontario, and is a professor in the Visual Arts Department at the University of Western Ontario. His work has been exhibited across Canada and internationally and is represented by Jessica Bradley Art + Projects, Toronto. A full-colour catalogue documenting Merritt's work is available in the AGW gift shop. A version of this exhibition was shown at Museum London, and the MacLaren Art Centre.